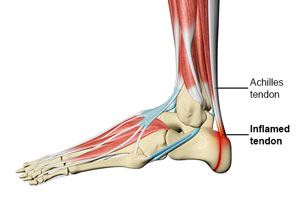 What is Sever’s Disease?

Sever’s disease is a painful inflammation of the growth plate in the heel. Growth plates are areas at the end of children’s bones that undergo changes so bone growth can occur. During this time, the muscles and tendons may not grow as fast as the bone causing tightness and pressure at the back of the heel.

With proper treatment, Sever’s disease usually resolves within 2 months with no long term effects on the child.x6

Sever’s disease, also called calcaneal apophysitis, is a condition causing swelling and pain at the back of the heel that affects growing adolescents.

Sever’s disease, also called calcaneal apophysitis, is a condition causing swelling and pain at the back of the heel that affects growing adolescents.

The inflammation occurs at the point where the Achilles tendon attaches to the calcaneus bone, the large bone that makes up the heel of the foot.

Sever's disease is a common cause of heel pain in physically active children in the early part of puberty, usually between ages 9-14.

Symptoms of Sever’s disease include the following:

Sever's Disease can be caused by the following:

Risk factors for developing Sever's Disease include the following:

Although Sever's Disease cannot be seen on an X-ray, your physician may order them to rule out other problems such as a fracture.

The goal of treatment is to relieve the pain. Treatment options include:

Any activities that cause heel pain should be stopped until the pain resolves. Adequate rest relieves pressure on the heel bone reducing swelling and tenderness.

Ice wrapped in a towel should be applied to the injured heel for 20 minutes 3 times a day to reduce swelling.

An elastic wrap or compression stockings may be used to help reduce the swelling and pain. Elevating the heel above the heart level also helps with the swelling.

Calf stretch, heel cord stretch, and hamstring stretch are performed to stretch and strengthen the leg muscles and tendons on the back of the leg. These should be done 2 -3 times a day, holding each stretch for 20 seconds.

Strengthening exercise using a bungee cord or rubber tubing is also performed 2-3 times a day to strengthen the muscles on the front of the shin. The child should sit on the floor keeping the affected leg straight. One end of the bungee cord is tied around a table leg and the other end around the child’s toes. Then the child moves back just far enough to stretch the cord. The foot is slowly bent towards the child’s body, then the foot is pointed towards the table in the opposite direction.

Over-the-counter NSAIDs may be taken to reduce the pain and swelling. Never give children aspirin due to the risk of a serious illness called Reyes Syndrome.

Orthotic devices such as heel pads, heel lifts or heel cups are recommended in children with pronated feet, and flat or high arches. These provide cushion to the heel and reduce the strain on the Achilles tendon.

In severe cases, a short leg cast may be applied for 4 to 6 weeks to immobilize the foot so that it can heel.

Sever’s disease can be prevented with the following recommendations: 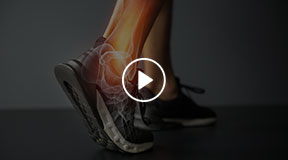